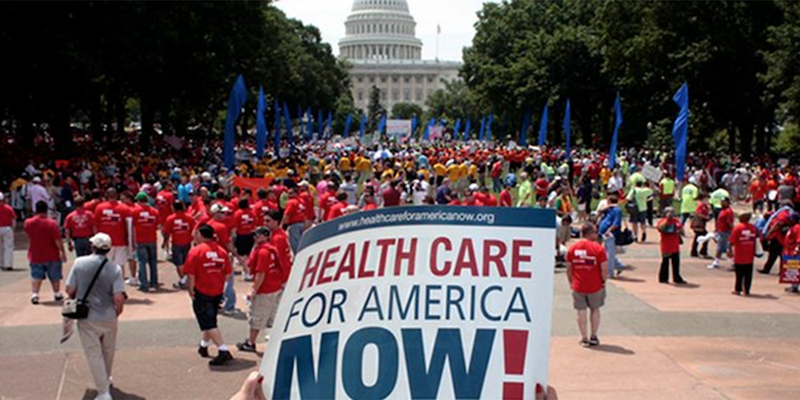 Congress has been debating changes to the 2010 health care law, the Affordable Care Act. These changes would impact your clients’ businesses and our country’s economy. The Senate is set to reveal their bill this week so it is important to understand what it means for small and microbusinesses. John Arensmeyer of Small Business Majority wrote in The Hill about what the current House and possible Senate plans will do to health care, especially for small and microbusinesses and the self-employed.

In 2011, a whopping 28 percent of the country’s 22 million self-employed were uninsured. As a result, this underserved group quickly took advantage of the ACA: 1 in 5 people who purchased health insurance through an ACA marketplace in 2014 was a small business owner, self-employed, or both, according to a report released by the U.S. Treasury Department.

Join our colleagues* for a very important Small Business Healthcare Call with Andy Slavitt, Senior Advisor, Bipartisan Policy Center and the Former Acting Administrator at the Centers for Medicare and Medicaid Services at the Department of Health & Human Services on Friday, June 23 at 11:00am PT // 2:00pm ET. *This event is brought to you by our colleagues at Main Street Alliance, American Sustainable Business Council (ASBC), South Carolina Small Business Chamber, and the Association for Enterprise Opportunity. And here in California, a healthcare bill is moving through the legislature. The Business Alliance for a Healthy California is hosting a webinar on the Business Case for SB562, the Healthy California Act on June 27, 2017 at 2:00-3:00 PM PDT. In this session we will discuss the basics of a Medicare-for-all single payer type system, special features of SB 562, and an economic analysis of the program conducted by outside experts.

The new section of the Must Know — And…Action! — is in response to the current political reality that demands that we participate more fully in the state and the federal legislative processes. We urge you to assign a staff person to be responsible for taking action. Federal News U.S. House of Representatives voted to gut key portions of the Dodd-Frank Act. This move would undo many provisions of a law that has addressed causes of the 2008 financial collapse and has protected small business borrowers from predatory lenders. Our friends at Small Business Majority weighed in. The legislation – H.R.10 – Financial CHOICE Act of 2017 – is now in the Senate. Let Senators Feinstein and Harris know that you oppose this legislation. And if your representative voted for the bill (the roll call votes), let them know that it’s not okay. Find your representative. California In an ongoing effort to improve California’s business climate, the Governor’s Office of Business and Economic Development (GO-Biz) announced that the California Competes Tax Credit (CCTC) committee approved $62.8 million in tax credits for 87 companies expanding and creating jobs in California. The awards will help these companies create a projected 6,400 jobs and generate over $892 million in total investment across California. And yes, several microbusinesses did receive the tax credit.

New opportunities for training, conference information, funding, scholarships, and other information that have crossed our desks since the last Must Know. I have posted a running tab of current Industry Goodies on the CAMEO website that lists items that were in past emails. Check it out to make sure you’re not missing anything, like grants whose deadlines are still alive! AEO Board of Directors: AEO’s Governance and Nominating Committee is currently seeking nominations for individuals to serve on the AEO Board of Directors. Are you or someone you know interested in serving? AEO is committed to cultivating a leadership that is as diverse as its membership and network. Eight elected seats are open. An elected seat can be filled by practitioners or non-practitioners but must be a member in good standing. If you know someone who would make a great volunteer leader, or if you are interested in serving, please review and complete the nomination form. The Board Nomination Form is due by 5:00pm ET on Friday, June 30, 2017. Job Quality Fellowship: Aspen’s Economic Opportunities Program will host a webinar on the Job Quality Fellowship. Learn more about the Job Quality Fellowship and the nomination and application process on Friday, June 23, 2017 from 11:30am-12:30pm PT // 2:30-3:30pm ET. Applications are due on July 17, 2017. See their website for details. Panel Discussion: Join our friends from ASBC on Thursday, June 29, 2017, 5:30-7:30pm for Employee & Worker Ownership: A Sure Fire Way to Build a More Sustainable Economy! Worker ownership and more democratically structured companies address several critical challenges facing the U.S. economy: inadequate retirement savings, income inequality and the silver tsunami with many boomer led companies closing their doors. Worker ownership has bipartisan appeal and can help grow local and regional economies in a more egalitarian manner. Location: Future State, 2101 Webster St #520, Oakland, CA 94612. Grant Opportunity: The USDA is seeking applications for technical assistance and training grants in the Community Facilities program. Learn more from the Federal Register Notice. The deadline is July 24, 2017. New Report: SBA Office of Advocacy has a new report – “Women’s Business Ownership: Data from the 2012 Survey of Business Owners” – that shows the major economic contribution of women-owned businesses, in spite of their average smaller size when compared to male-owned firms. New Report: The Center for Financial Security (CFS) and Asset Funders Network (AFN) released the results of the Financial Coaching Census 2016. New Report: WIPP and American University’s Kogod Tax Policy Center released “Billion Dollar Blind Spot: How the U.S. Tax Code’s Small Business Expenditures Impact Women Business Owners.” Women business owners are missing out on key tax provisions and can’t take full advantage of $255+ billion in tax incentives designed to stimulate small business growth, access to capital and investment because of how they are legally organized and the industries they are in.]]>